Once you've finished reading or watching the video, you must click on the "lesson complete" button to register you've completed this lesson, and the move on to the next one  Click here to go to the lesson complete button

Unique only to emotions is the fact that emotions are carried down an organizations hierarchy, basically affecting everyone. And the single most important element in group intelligence is not the average or even the highest IQ, but it's emotional intelligence. What we call EQ.

In fact, according to an article in Time magazine, IQ gets you hired. EQ gets you promoted.

So think of it this way, your IQ and your technical capability are your 'permission to play' as a leader.

Great EQ enables you to shine as a Rockstar leader.

And an absence of EQ will see your career derail.

The EQ of leaders affects individual, group, and organizational outcomes.

Indeed, according to an article by HBR, Harvard Business Review at the top levels of leadership EQ accounts for as much as 90% of success. Satya Nadella, CEO of Microsoft took over from Steve Ballmer in 2014. Now Satya has transformed Microsoft, both in terms of culture, customer service, and financial results. 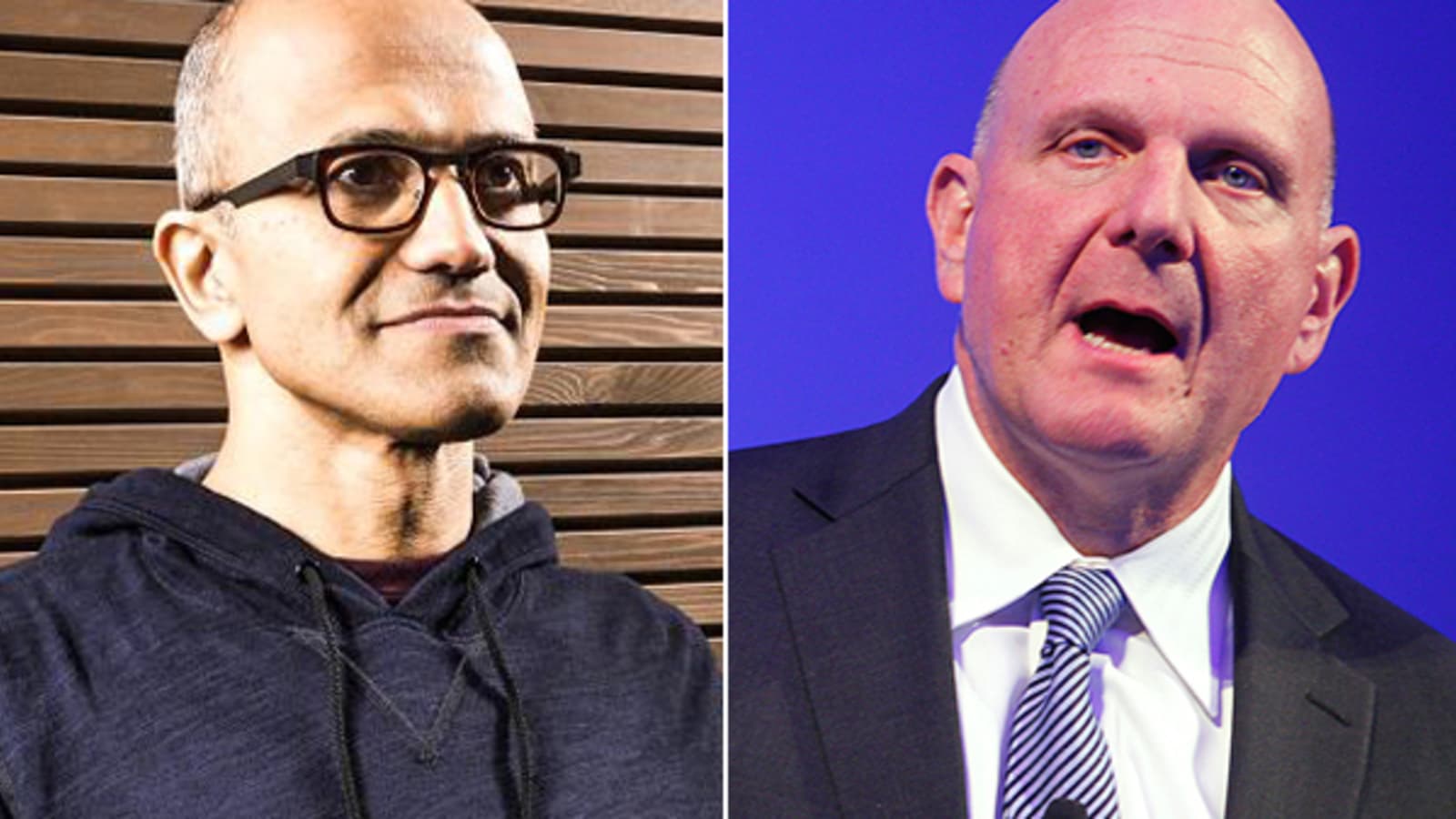 Satya inherited a culture at Microsoft of bickering in-fighting and distrust. Which was a legacy from both the days of Gates and Ballmer being at the helm.

Because of his high EQ, one of the first things that Satya worked on within Microsoft, was to get people communicating and influencing each other in a way that strengthened relationships and improved business results.

A ripple effect of positive outcomes can be tied to leaders with high levels of EQ.

So, let's see why emotions ripple through entire teams and companies.

It's a thing called Entrainment.

In1656, Dutch physicist, Christiaan Huygens, invented the pendulum clock and he found that if he pushed one clock out of sync deliberately, then they would all sync back up again, within a few minutes. What was happening was one clock was sending its reverberation signal through the wooden case and across the wooden floor to all the other clocks, which were then, entrained by that signal.

In other words, the signal of one clock, trained all the other clocks to follow its lead. It was always the biggest pendulum that dictated the synchronization.

So any complex system that has a repeating pattern, repeating beat or a rhythm will always sync up to the strongest and most powerful beats.

Someone’s heart is racing (and they are a powerful influencer) you can expect that other people in the room will soon start feeling uncomfortable.

Synchronization also happens in business when a powerful leader sets the tone for the team. The team then starts to sync to that rhythm.

Which can either be very good or very bad.

We pick up on each other's energy all day long.

Have you ever been out to dinner at someone's house and the minute you've walked through the door, you thought, oh, they're in the middle of a huge argument. Now your hosts haven't said a word. In fact, they're probably being quite civil to each other, but boy, you can feel the tension in the air.

You're feeling their vibe and it makes for a possibly civil, but a fairly unpleasant evening. With everyone tip-toeing around the unspoken tension.

Or think back to a time when you've picked up on the feelings of others. Like at footy matches or churches, when you've got swept up in the emotions of the people around you.

Whether it's a funeral, a footy game, or a comedy night, it's nearly impossible not to get caught up in the emotions. Because it is so potent when emotions are expressed by so many people simultaneously.

And don't fool yourself into thinking that this is all pie in the sky stuff.

Key people will join or leave your company and customers will buy or not buy your products and services for only one reason. Emotion.

Have you ever been in a store, or rung a customer service center to be served by someone whom you realized was simply just going through the motions, they may smile and say all the right words, but you get the sense that they would rather that you weren't there and they'd rather not be there.

But contrast that with a time when you interacted with a company representative who just seemed delighted with the world and happy that you happen to be passing through their world right at that moment. It's quite a different feeling isn't it?

So every day you'll experience emotions of one type or another. ...

So, we all deal with emotions all day long.

And yet we're taught when you come to work leave your problems - meaning emotions - at the door. Now it's quite illogical to expect that people can leave their emotional self at the door.

Certainly they can stamp those emotions down. But they'll leak. And sometimes in the most unfortunate of times.

The ability to use your knowledge, skills, experience and natural talents to their fullest extent, in any circumstance so that you have access to your best performance and decision making.

Below are the five building blocks of emotional intelligence that give rise to superior performance and decision making. 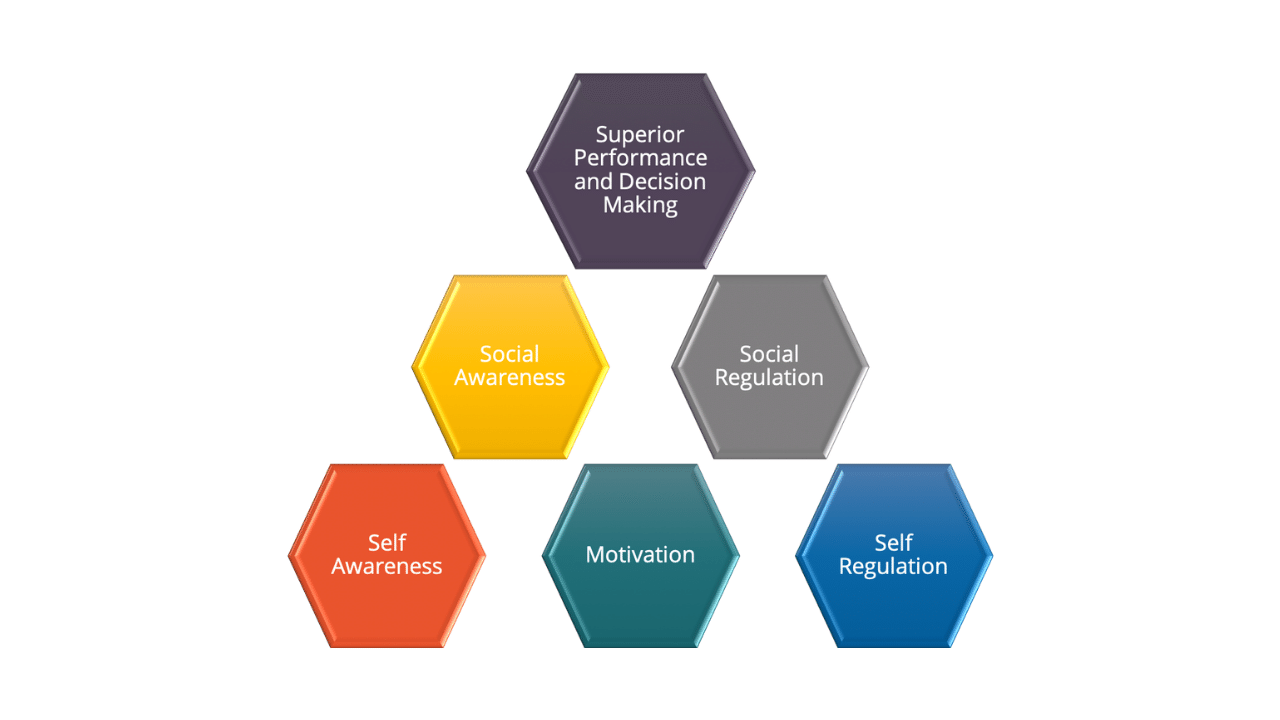 So we'll be looking at Self-awareness, Self-regulation, Motivation, Social-regulation and Social-awareness in the next few modules.

So by now, hopefully you've completed your online profile. Once you've gotten through this training, I will be then sending you your report so that you will be able to look at your scores.

Now that you've completed this lesson, click on the complete lesson button and move on to Self-Awareness

Next Lesson »
The next lesson will be available in 0 days
Please click on the button to complete the tasks above.

Resources
Start
Get your daily life and leadership inspiration