Once you've finished watching, click here to go to the lesson complete button

Self-awareness is the cornerstone to emotional intelligence. It's the ability to recognize and understand your moods and the impact they have on you and your team's performance.

It's the ability to take your emotional temperature, and to ask these three key questions.

And with this understanding, you're better able to appropriately respond to a given situation which supports your career and life success.

So it's crucial that you take the time to sense, and recognize your feelings and describe them as accurately as you can. In the resources section, there's a feelings list. Use that list to get a broader repertoire.

Practice moving up the emotional scale.

Ask yourself, How do I feel? And what would help me move from, for example, anger to frustration.

It's important to understand that you can't jump from depression to passion.

That's too big, a leap, but making a move from depression to anger is a move in the right direction because you've got some energy happening. 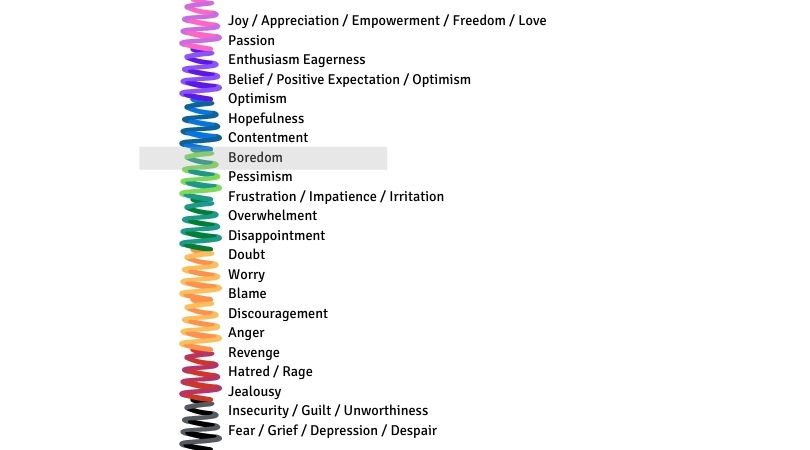 Now you don't want to stay in anger for too long, of course. But now that you've got movement, the next question is what do I need to do to get from anger to discouragement, to irritation, to hope and so on.

So in the resources I've given you a diagram of the emotional scale, it comes from the book by Esther and Jerry Hicks called, The Astonishing Power of Emotions.

It's really only a book for people who are into woohoo!

But if you're into woohoo, it's a great book and it's got loads of activities in there for handling your moving up and down the emotional scale and handling your emotions.

I've got a question for you...

Do you think of yourself as a rude person?

Well, when was the last time you were snippy with someone? When you, when you let your feelings get the better of your tongue?

Because we don't like to think of ourselves as rude. But in that moment, the person you walk away from will think that you are indeed a rude, disrespectful, discourteous, angry, and inconsiderate person.

So you need to be aware of the signals from your body.

Now we'll pause here for a bit, because I'd like to share with you a Ted Talk by Dr. Alan Watkins, a neuroscientist and leadership expert. It's called Being Brilliant Every Single Day.

Alan helps you to understand what happens when you're under an emotional attack. Once you've watched that video then we'll dig a bit deeper into Self-Awareness.

Click on the Lesson Complete button and move on to watch Being Brilliant Every Single Day.

Next Lesson »
The next lesson will be available in 0 days
Please click on the button to complete the tasks above.

Resources
Start
Get your daily life and leadership inspiration